The Universal Christian Church of the New Jerusalem has its roots in Maria Giuseppina Norcia, the woman chosen by God for the fulfilment of His Plan of salvation for all humanity. She was born on January 21, 1940, in a small village situated in the Comino Valley, in central Italy. She was conceived before Time, and God knows Her since forever, because She was already present in the Father’s Thought (see Rm 8: 28-30).

On June 13, 1947, in the Land of Love, the Baby Jesus descended from Heaven and manifested Himself to the young Maiden, thereby giving life to a great Mystery that is inscrutable and inaccessible: the Mystery of Salvation for humanity that will be manifested over the years through the Maiden chosen by the Father. 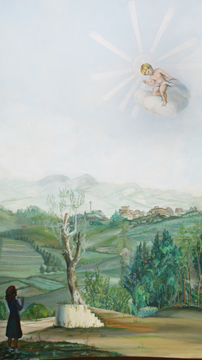 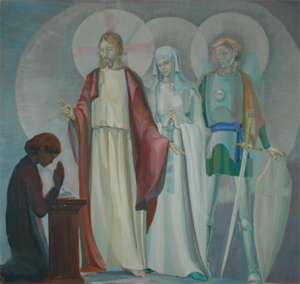 On May 15, 1974, in a moment of great trial and suffering, She welcomed God’s Will that was manifested to Her. This was the day of Her Wedding with Heaven. Jesus, Our Lady and St. Michael the Archangel appeared to Her, and they remained with Her in a long conversation. God’s Maiden, pronouncing Her “yes”, married the Will of the Father, who through His Son preannounced to her the salvific Mission for humanity that She would have to fulfil.

Four days later, Jesus appeared to Her again, together with Our Lady and Saint Mesia (a holy Martyr who lived at the time of the persecution of the early Christians) and healed Her from a deadly disease which was afflicting the Woman of God. 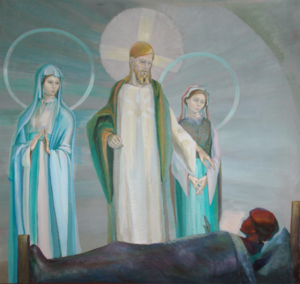 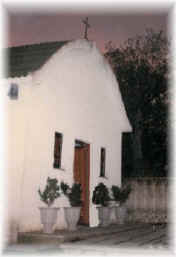 By the Will of the Father, the “Little Cradle of Baby Jesus” was built in 1975. In a revelation in June 1994, Jesus said: “This Cradle will be My Tabernacle” (Revelation of Jesus to Maria G. Norcia. June 19,1994), thus preannouncing the deep significance of the Place chosen by the Father.

Maria grew ever more animated by a lively and deep religious faith in Christ and in authentic Christian doctrine. Since Her childhood, She was very dedicated to prayer and to love towards Her neighbours. The authentic Christian teachings are alive in Her Heart. She put them in practice and, with humility and lively charity, exhorting the same to all those who from 1975 to 2008, would have known and met Her at the “Little Cradle.”

In the 1980s, Msgr. E. Cardarelli, minister of the Diocese of Sora of the Roman Catholic Church, received the task of following the spiritual path of God’s Maiden. Recognizing the truthfulness of the revelations and the authenticity of the mystical experience of the Woman of God, he decided to write, with the approval of his bishop Msgr.  Minchiatti, a detailed account of the facts. He wrote the story in a pamphlet entitled “A Cradle for Baby Jesus in the Land of Gallinaro“.

“The Lord insisted so much on having a little church built in the place so cherished by Him, where He first appeared in Gallinaro, which would serve as a “Cradle for Him”, because from it he desired to grant heavenly treasures to all souls“.

With reference to Maria G. Norcia, he states that:

“Trust in Giuseppina’s mission is due to the spiritual fruits this mission itself has produced, in addition to the persistent and increasing influx of all who direct their steps to the “Mystic Cradle” of Gallinaro, where Baby Jesus infuses trust, soothes pains, irradiates light, gives back faith, peace, love and leads souls to profound and stable conversion”.

Finally, he concludes by writing what now appears as a prophecy:

“Of course, there will always be someone who, having little faith, will have doubts concerning that Cradle; or someone who will commiserate her who has received the heavenly charge of making the Cradle shine before the eyes of human creatures, groping in the darkness of iniquity, needing exceptional signs of divine mercy in order to escape it. But these deriders are not aware that their rationalistic certainty is opposed to the attestation of the Holy Spirit, that “as long as man thinks that human reason can be the measure of all things, he will never understand spiritual realities.” (1Cor 2:12-16). They are fallacious judges and should not be followed. Spiritual gifts or charisms, especially if they manifest themselves in God-fearing persons, must not be prejudicially refused in a hasty and injurious way, because this would lead to an aprioristic and heretical negation of the action of the Holy Spirit in the Church“.

(Monsignor E.Cardarelli, “A Cradle for Baby Jesus in the Land of Gallinaro”)

During Her thirty-three years of public life, Maria G. Norcia, the Woman of God, has witnessed and documented thousands of conversions to the Christian faith as well as numerous cases of spiritual and corporal healing. 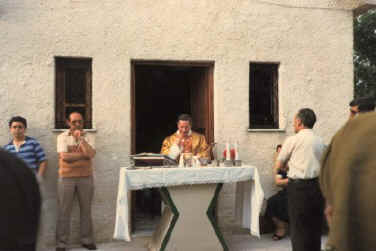 Despite the initial blessing of Her mission by Msgr. Cardarelli (who used to celebrate Mass at the “Little Cradle”) and his bishop; despite the undeniable spiritual and corporal fruits that came from the Work of God, the Roman Church’s attitude quickly changed and became increasingly hostile. After the death of Msgr. Cardarelli and Bishop Minchiatti, the Woman of God began to receive growing and continuous harassments and humiliations by many Roman ministers and bishops. Several times she was asked to deny the supernatural nature of the revelations received and to remove what other bishops had blessed in the meantime. The Woman of God, although she was terribly afflicted in Her heart, remained faithful to God and to the mission entrusted to Her.

On the feast of the Epiphany of the Lord in the year 2000, Maria welcomed Samuele to the “Little Cradle,” whose coming was preannounced to Her by God for the fulfillment of His Will. From that day onwards, Samuele dedicated Himself to the mission begun by Maria G. Norcia, under whose spiritual guidance He acted in unconditional obedience. On August 4, 2002, Samuele was united in marriage with Anna, the daughter of Maria G. Norcia.

In those years, the number of the faithful who came to the New Jerusalem grew exponentially, as did their faith. Every year hundreds of thousands of Christians come to the “Little Cradle” arriving from different regions of the world, to live the authentic spirituality that flows from the Heart of the New Jerusalem. Many have the opportunity to experience the living presence of God in the “Little Cradle”.

Maria G. Norcia lived the last years of Her earthly life in total spiritual union with Samuele and Anna, who welcomed Her in their home. At that time, the Mystery of the New Jerusalem took on ever greater consistency and life. Before the final step of Her earthly mission, Maria entrusted to Samuele the task of making the fulfilment of the New Jerusalem consist in all Christian hearts. 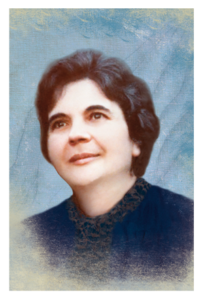 On July 5, 2008, Maria G. Norcia returned to the Father’s House. As she had done countless times throughout her life, She again renewed Her faithful and unconditional “yes” to the Will of the Father, who called Her to Himself after thirty‑three years lived in prayer and in the authentic service of those whom the Spirit of God brought to the “Land of Love”, that God the Almighty Father wanted to call “The New Jerusalem”. 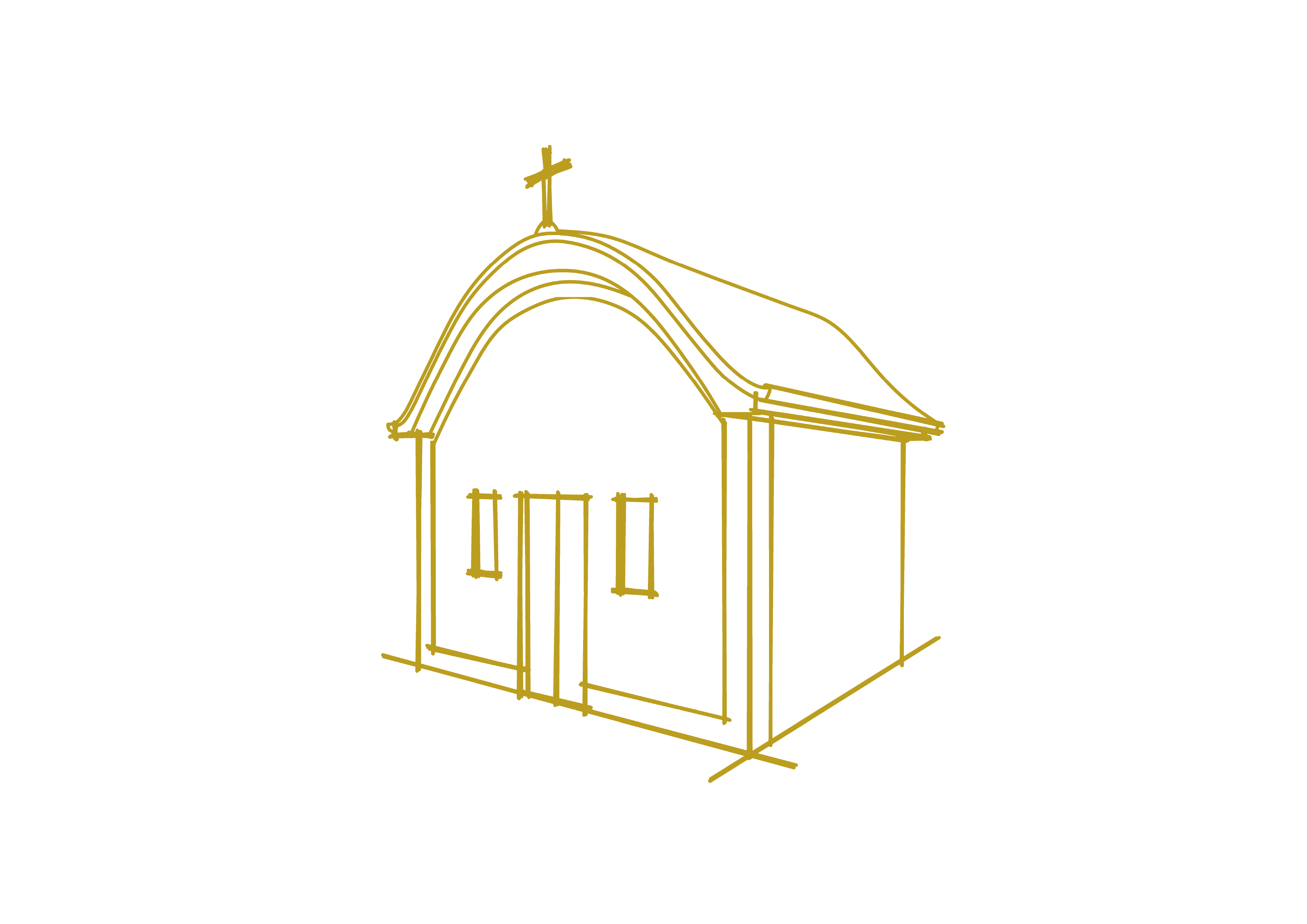